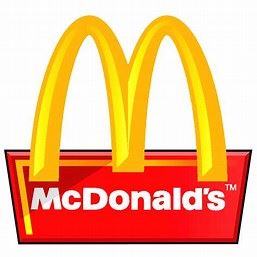 CONGRATULATIONS TO ALL on a very successful golf tournament! It doesn’t take a village to have a profitable MOAA golf tournament, but it does take the backing of an active chapter membership, a dedicated golf committee, supportive hole and major sponsors, a high number of players and numerous volunteers as a recipe for success. Through hard work, we were able to realize a net profit from the tournament of more than $26,000.

If you participated in any way, you should feel good about the benefits we will be able to deliver to JROTC/ROTC programs and disadvantaged veterans.

The first meeting of the Golf Committee was held in December 2018 to plan out the next five months. Members were Jim Albert, John Bradley, Randy Dymond, Frank Esposito, David Fischer, Jim Offutt, CJ Parente, Truman Parmele, Calvin Peck, Dave Sheppard, John Short, Bill Stewart, Jerry Terwilliger and me. In general, we formed three teams each responsible for the North Strand, Mid Strand and the South Strand. Solicitations were made for donations from golf courses and local business establishments. A flyer was developed to entice players to participate. A contract was signed with the Legends Group where we had to pay for a minimum of 120 players. 152 players entered.


We want to thank our volunteers. Most were from our membership, but some came from our corporate sponsors such as Stephanie Bohardt of Monarch Roofing, Helen Peters from CresCom Bank and members of the JROTC unit from Myrtle Beach High School. It was a very cooperative effort. Seven more months and we do it all over again. If you want to participate, please let Dave Townsend know! 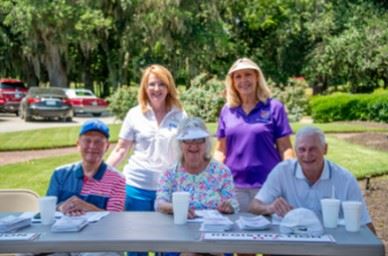 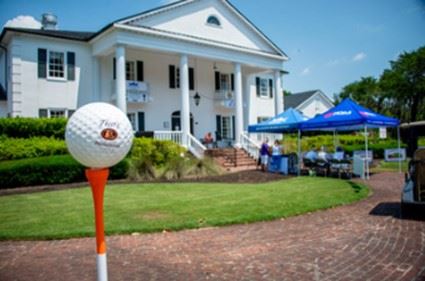 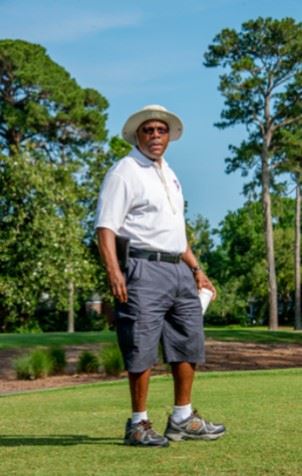 Rufus Manning (looking for his ball??)

Our Chapter had another excellent and successful golf tournament during Military Appreciation Days, due in no small part to the determination and hard work of our many volunteers and sponsors.  President Dave Townsend led the golf committee's effort but is the first to give credit to all the committee members who signed up sponsors and golfers and got the Heritage Club venue ready and organized for the  day's activities.  Thanks to all, members, sponsors and golfers alike !

Please read the President's Report below. 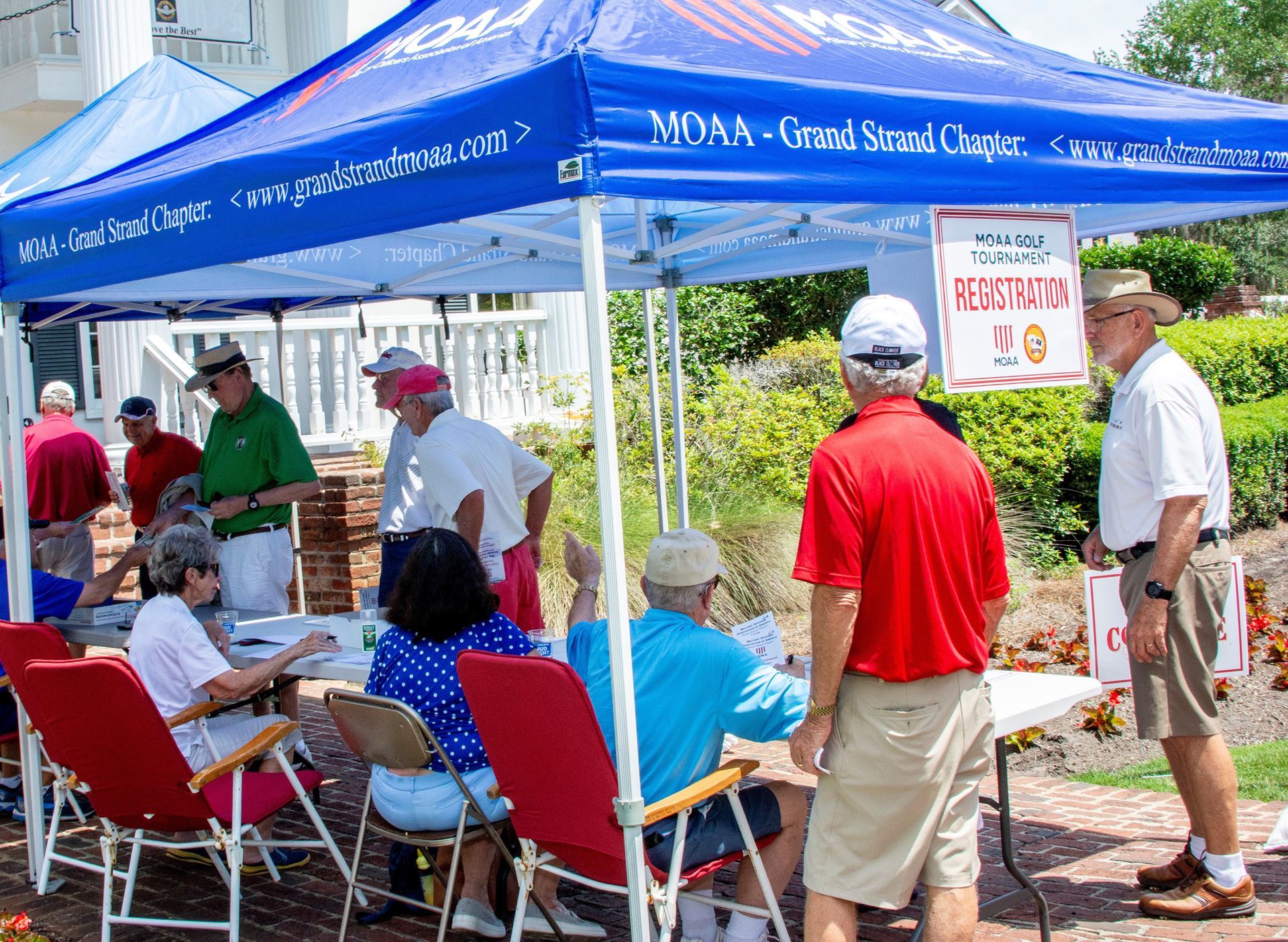 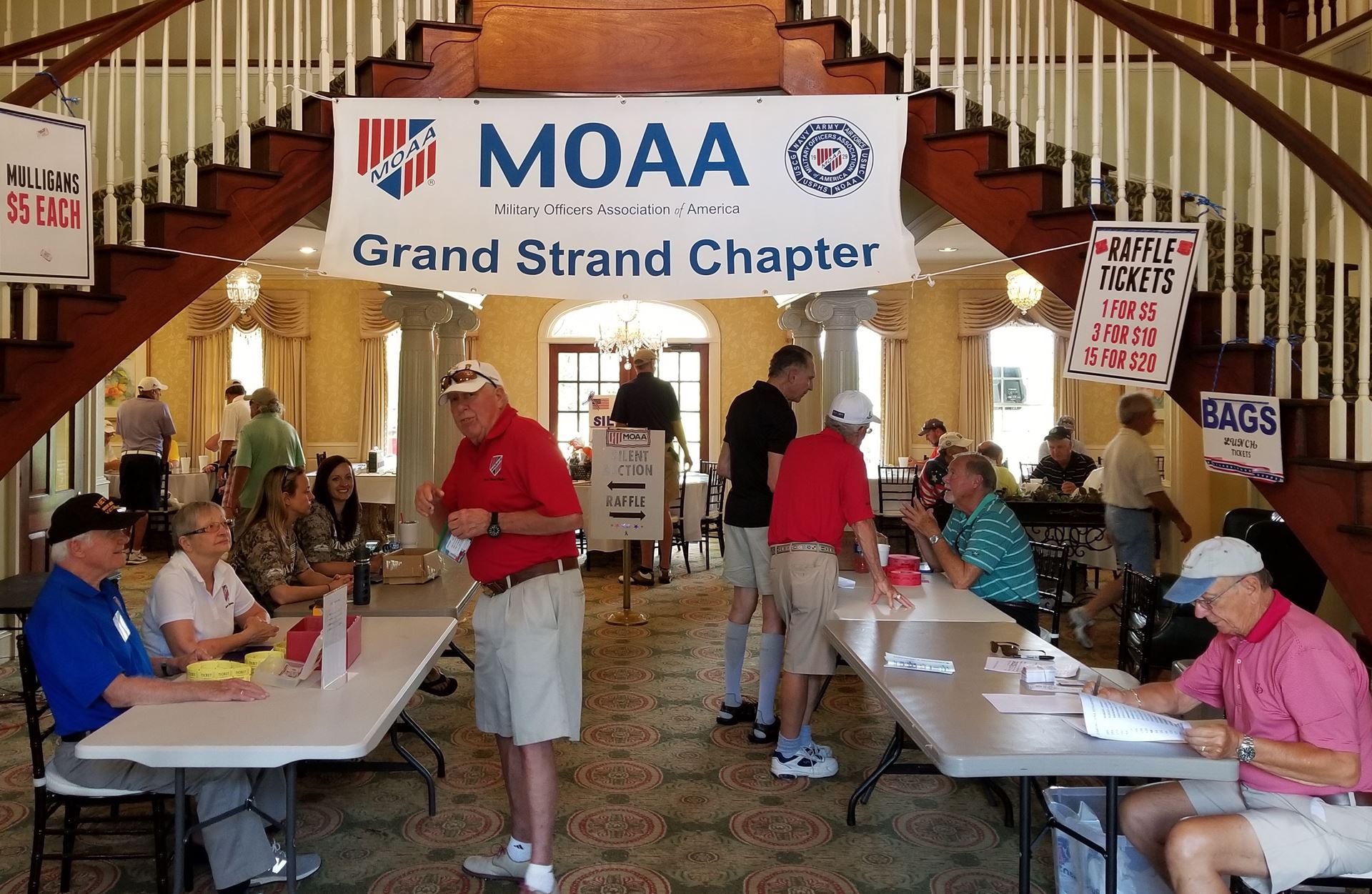 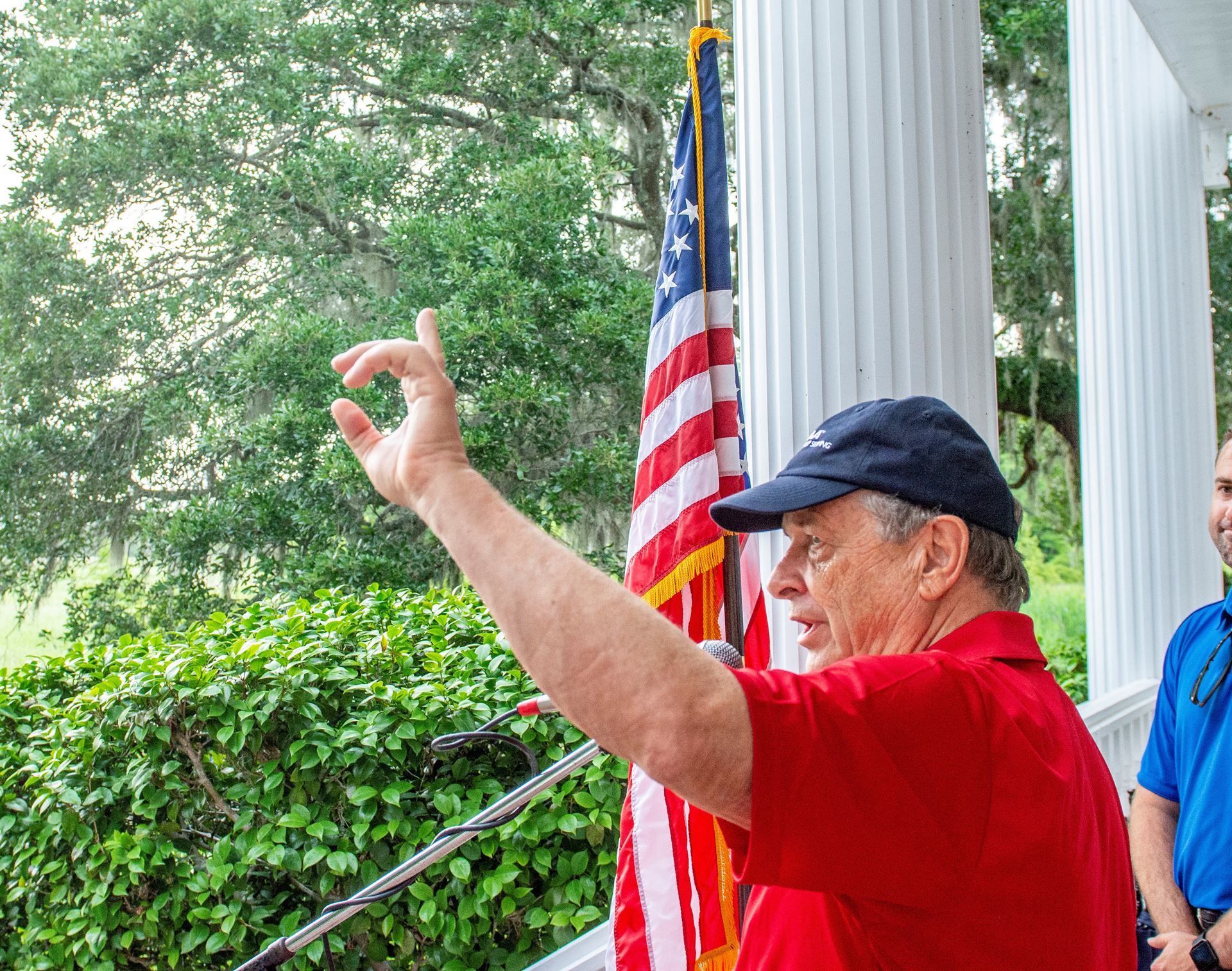 On May 24th, we held our 5th annual golf tournament fundraiser at the Heritage Golf Club in Pawley’s Island.  The weather appeared dicey just like the previous year.  As we rode out to our first tees, we were rained upon, but, magically, as we approached the tee box, the weather changed, and we had perfect weather the rest of the day. 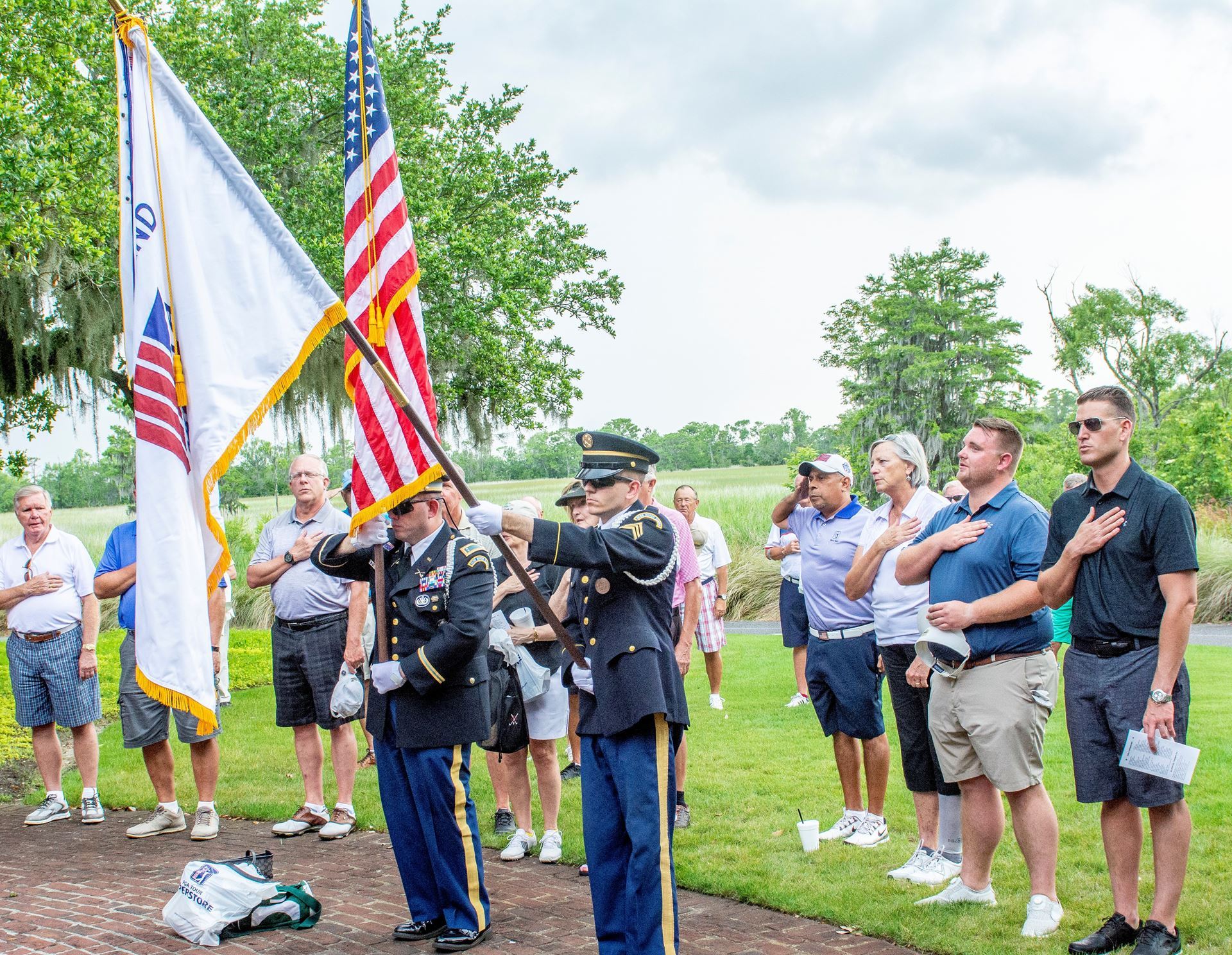 139 golfers came out that day to enjoy lunch and bid on our silent auction items during the registration period between 12 to 2 pm.  At 2 p.m., the South Carolina State Guard Color Guard kicked off the event.  Bradley Vaughn from the Legends Group gave out the tournament rules and the competition began.  Upon completion of play, hot and dusty, we returned to the welcoming airconditioned dining room and gulped down hot dogs, beer and finished up at the Cold Stone Creamery stand that was set up in the corner of the room. 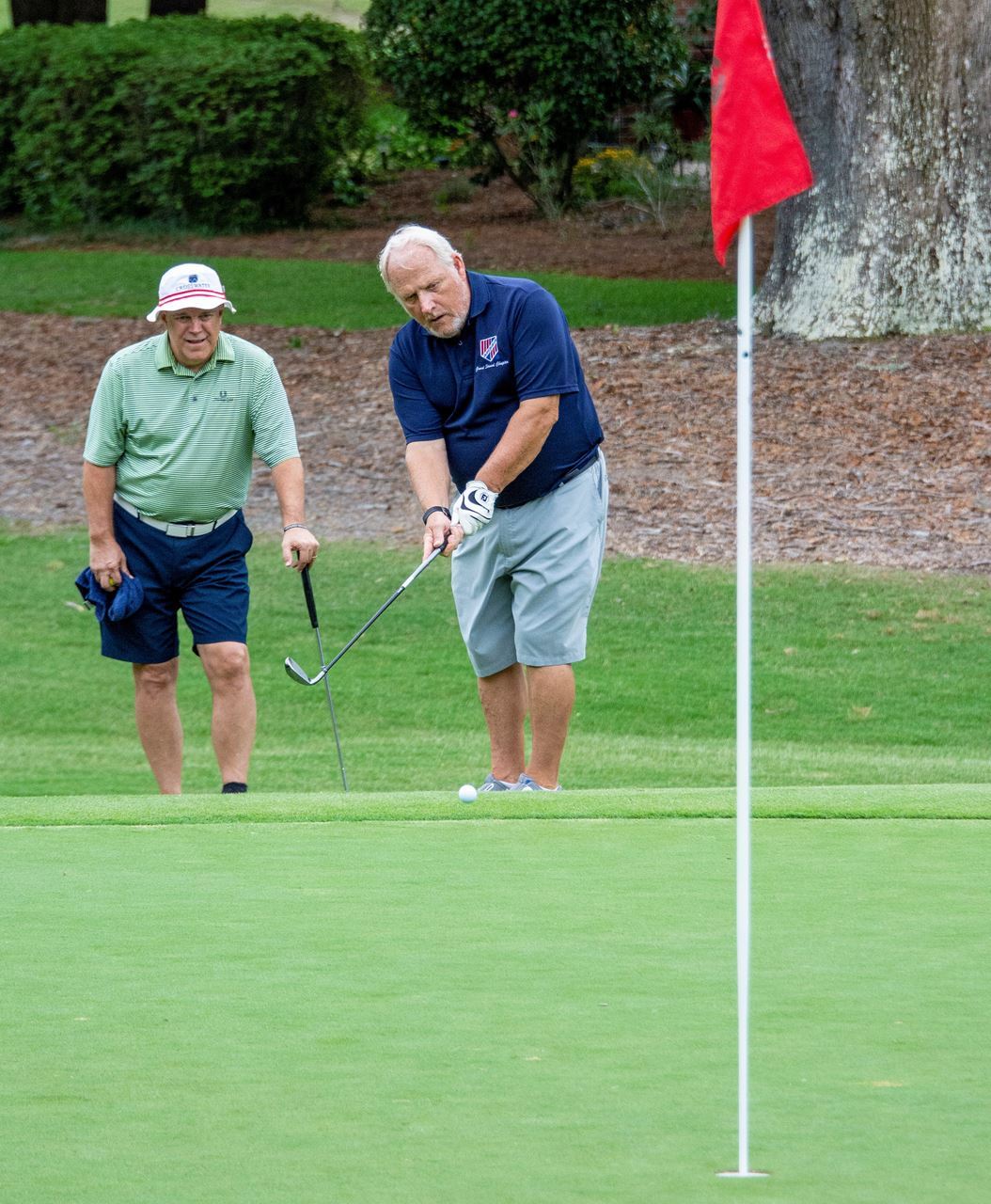 We hold this event to finance the JROTC Scholarships and programs, and to service our veterans’ needs in many ways.  This could not be attempted without the dedicated members of the Golf Committee.  This journey begins in January and takes up a wide swath of personal time until the tournament in late May.  Through this time-consuming work, we were able to net this year approximately $22,500.  I want to thank the following members of the committee for their time and effort:  Frank Esposito, John Short, David Fischer, David Sheppard, CJ Parente, Jerry Terwilliger, John Bradley, Bill Stewart, Gerry Sherwin and Tony Prince.  We also received assistance from Kelly Sharbel and Greg Youngman.  The day of the event, John Bradley, our volunteer coordinator, had 16 volunteers who were club members, and 6 additional non-member helpers.  Most were nongolfers who tended to things while the rest of us were battling the course. 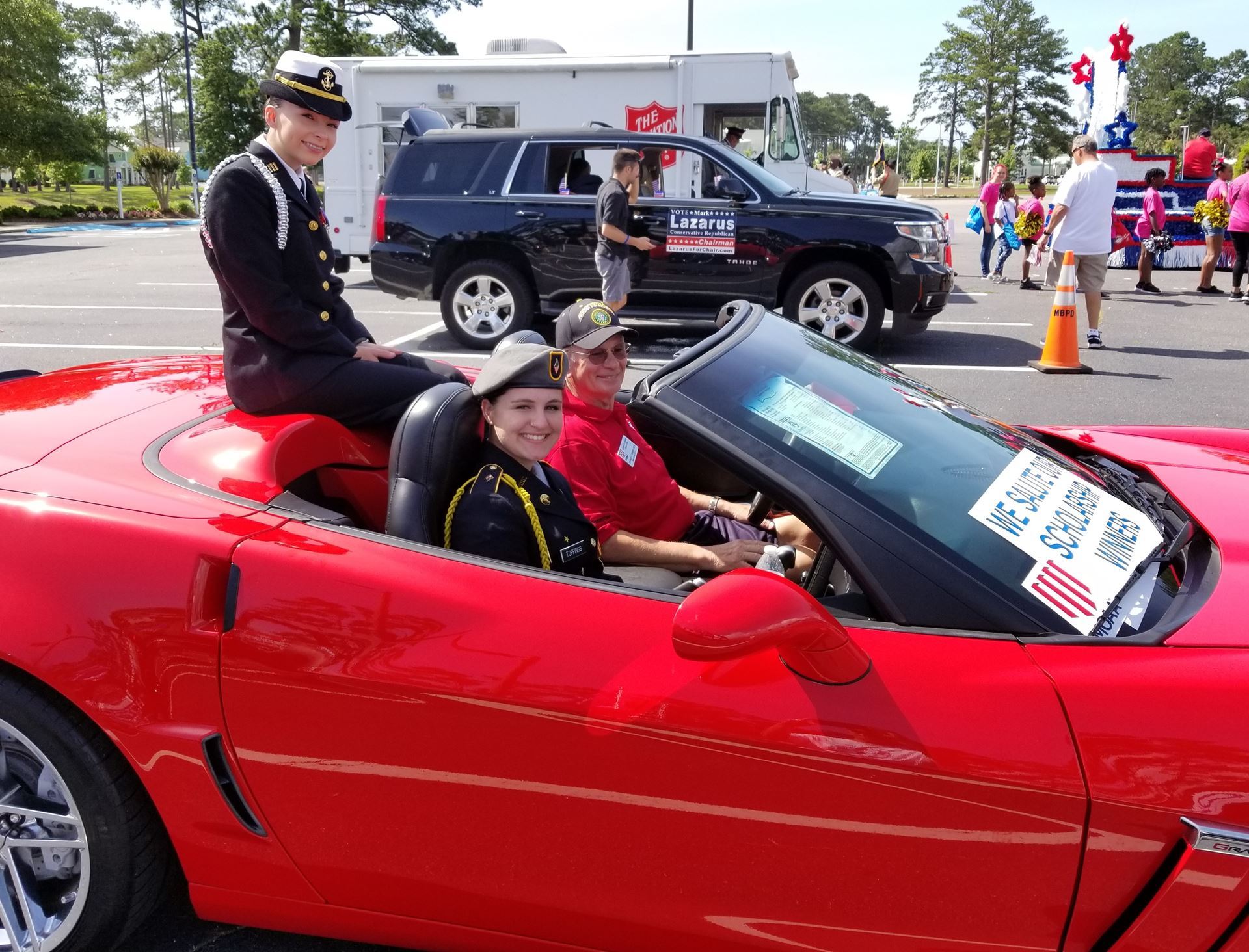 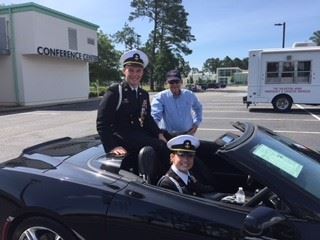 Next year we will need additional members on the golf committee.  Last year we lost Tom Middleton, Gerry Eubanks and Fred Welch.  This year we picked up John Bradley and CJ Parente.  The continuation of the tournament is necessary if we want to give respectable $2000 scholarships, support the homeless veterans stand down, provide funding to the individual 18 high school JROTC programs, support wounded warriors, etc.  So, if you are a new member and want to get involved, we need you.  Thanks again to all who made the 2018 tournament a success and I hope you will participate again next year.