DUE TO THE VIRAL PANDEMIC, THE ANNUAL GRAND STRAND MOAA GOLF TOURNAMENT HAS BEEN POSTPONED UNTIL SEPTEMBER 10, 2020.  SEE OUR "GOLF" MENU FOR THE LATEST REVISED FLYER AND INFORMATION.

Thanks to the generosity of our members, plus Low Country Monuments in Somerville, SC and the City of Myrtle Beach, Grand Strand MOAA installed a Memorial Monument to our Past and Present Members at Warbird Park on Market Common in Myrtle Beach, Aug 2020.  A formal dedication ceremony will be held on this location, October 13, 2020 at 3PM, followed by Dinner at Prestwick Country Club in Surfside Beach, SC. 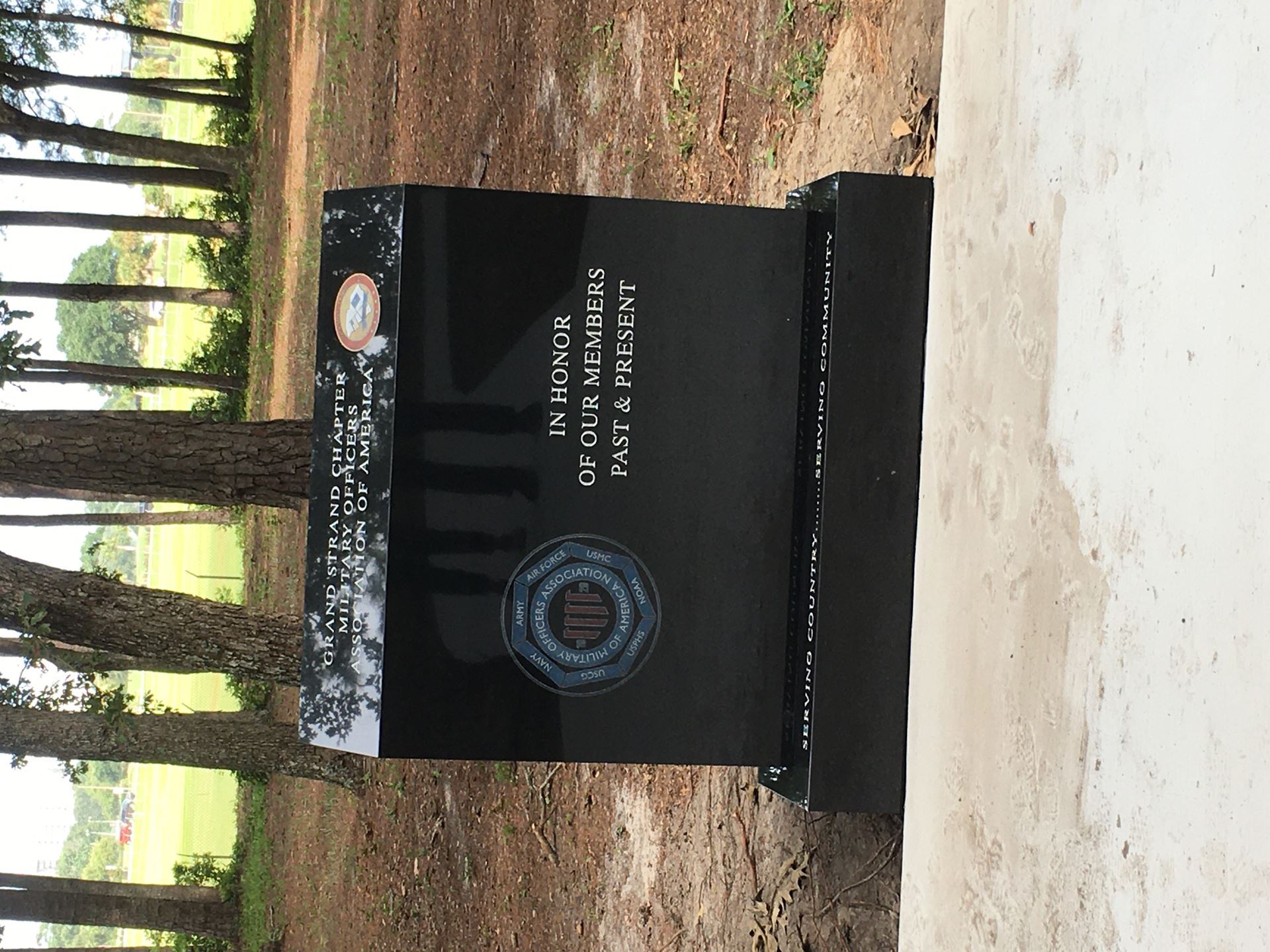 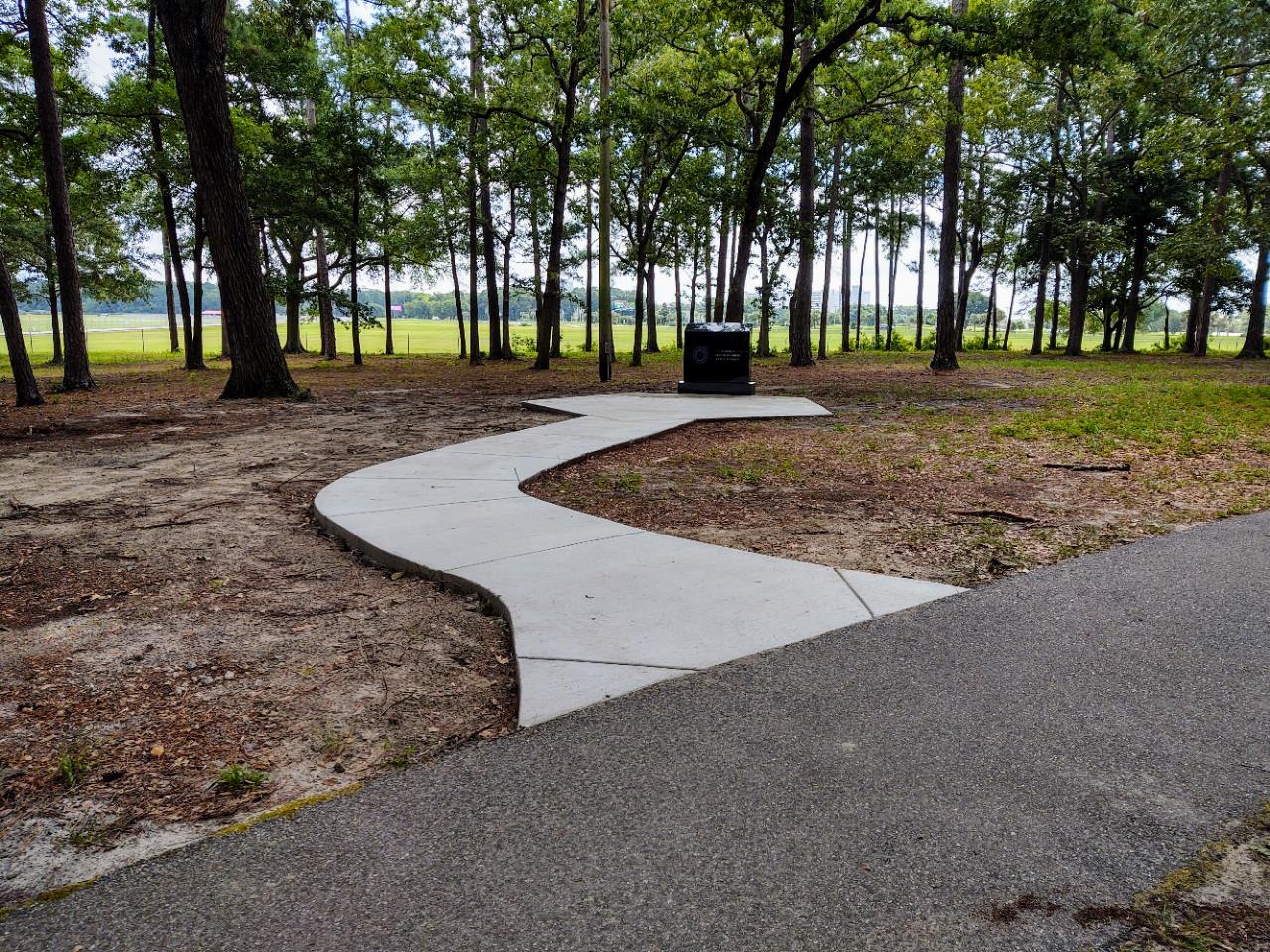 Homes For Heroes presents Grand Strand MOAA with a $5,000 grant for the 3rd year in a row, in Aug 2020, to help veterans and their families stay in their homes as well as provide help with basic necessities of life. 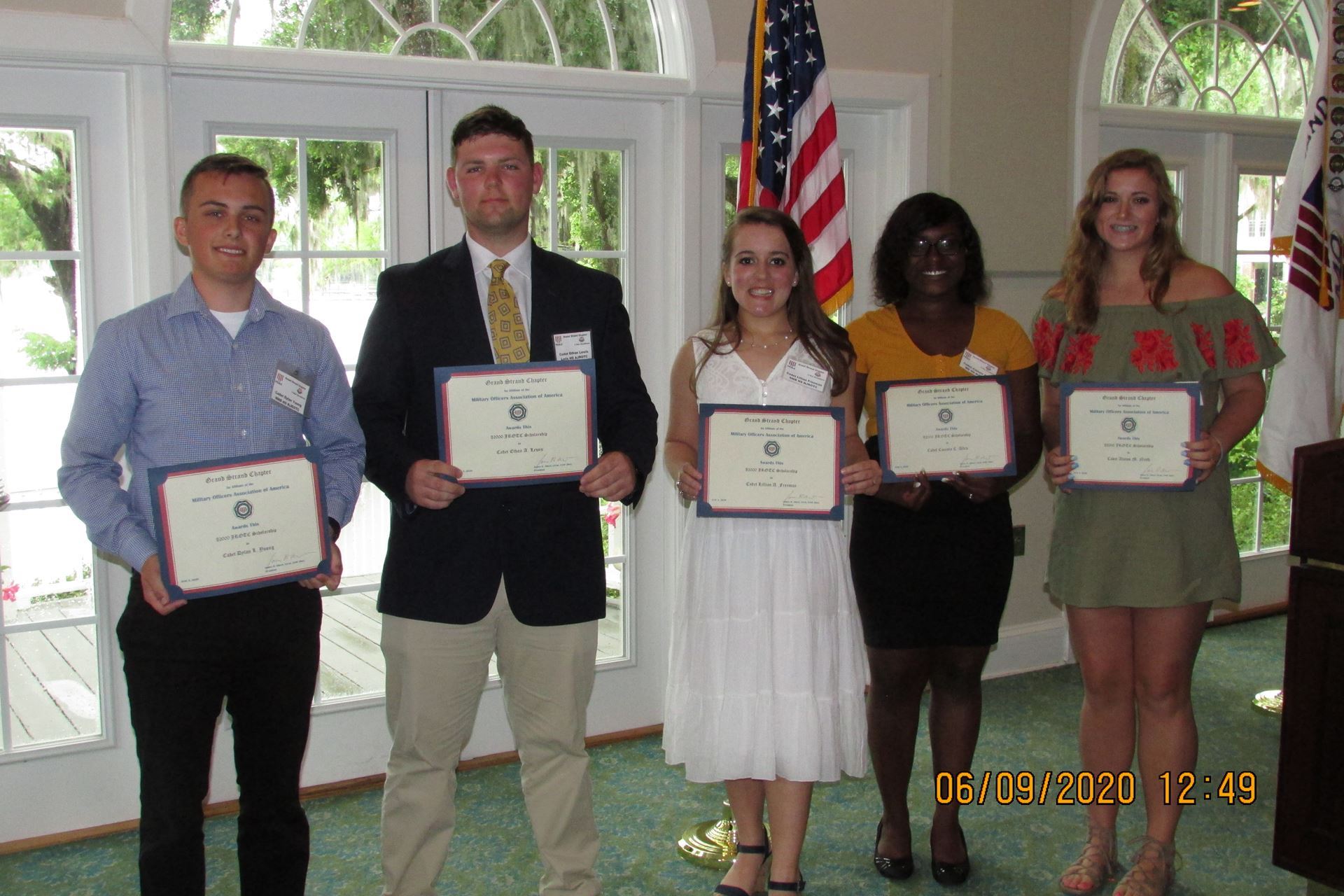 The Grand Strand Chapter of MOAA awards five graduating area high school Junior ROTC cadets with $2,000 scholarships to attend the college of their choice.  A luncheon to honor this year's winners took place at Kimbels Restaurant on Wachesaw Plantation in Murrells Inlet, SC on June 9th.  This year's winners are (from left to right):

Cadet Dylan L. Young (Navy JROTC) has excelled as a student and JROTC cadet at North Myrtle Beach High School. His honors include selection to the National and Social Studies Honor Societies, and the American Legion JROTC Academic Excellence Award. As Drum Major of the NMBHS Marching Band, he trained and led the Band in award-winning Band competitions. Each year he held increasingly more responsible and demanding positions in his unit including rifle team commander. Cadet Young will attend The Citadel and seek an active duty military commission.

Cadet Ethan A. Lewis (Army JROTC) is a scholar, athlete, and leader at Loris High School making the honor roll, playing on the Loris High School Football Team and in the school orchestra.  His Senior Army Instructor describes him as a cadet that epitomizes Army values and always sets the example for peers and subordinates alike.  He takes time to mentor junior cadets while holding down a part-time job.  His “can-do” attitude and willingness to take on new challenges will undoubtedly serve him well when he attends The Citadel this Fall.

Cadet Lillian A. Freeman (Navy JROTC) was a 4.0 GPA honor roll student at North Myrtle Beach High School earning academic and leadership awards from numerous national organizations.  In her unit she held the positions of Public Affairs and Executive Officer and initiated several new programs to improve unit operations.  She was a member of the unit Academic Team that placed top 90 percentile in the national NJROTC competition.  Cadet Freeman also volunteered on campus and in the community fundraisers for worthy causes.  She has received a Letter of Assurance from the US Naval Academy and hopes to be commissioned in the Navy.

Cadet Conisia C. Allen (Navy JROTC) excelled academically with a 3.7 GPA while taking numerous Honors Courses, earning induction into honor societies and the National Beta Club.  She served in various leadership positions including Chief of Staff in the Myrtle Beach High School’s NJROTC program.  Her efforts resulted in the MBHS unit being recognized as the “most improved” program out of over 600 nationwide.  Cadet Allen has also given generously of her time mentoring fellow cadets and supporting various community projects.  She will continue her education at Coastal Carolina University.

Cadet Alston M. Nash (Navy JROTC) has gathered multiple academic honors as a student and cadet at Georgetown High School.  She served as NJROTC Battalion Executive Officer and knew all 160 cadets by name. Additionally, she was Commander of the Physical Fitness and Armed Regulation Drill Teams.  She led the unit to a ranking of the #1 NJROTC unit in North and South Carolina during school year 2018-2019.  As soccer player and Team Captain, Cadet Nash won more soccer matches in a four-year period than any other student/athlete at Georgetown before her.  Her future goals are to attend USC and become a dentist. 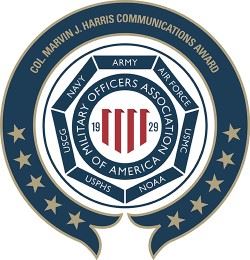 June 2020:  Grand Strand Chapter of MOAA wins the Harris Communications Award for a fifth year in a row.  This year the Chapter won the highest 5-star award in both the "Print" and "Digital" categories!!  We are the only Chapter in the state to win the top prize in both categories!

June 2020:  Community Foundation of the LowCountry awarded the Grand Strand Chapter of MOAA a $3,000 Opportunity Grant to purchase a Dual Wheelchair Bicycle for the Victory Veterans Home in Walterboro, SC.  This project is being done in partnership with the Hilton Head Chapter of MOAA and will allow wheelchair bound veterans the ability to go on bicycle rides with Veterans Home staff. 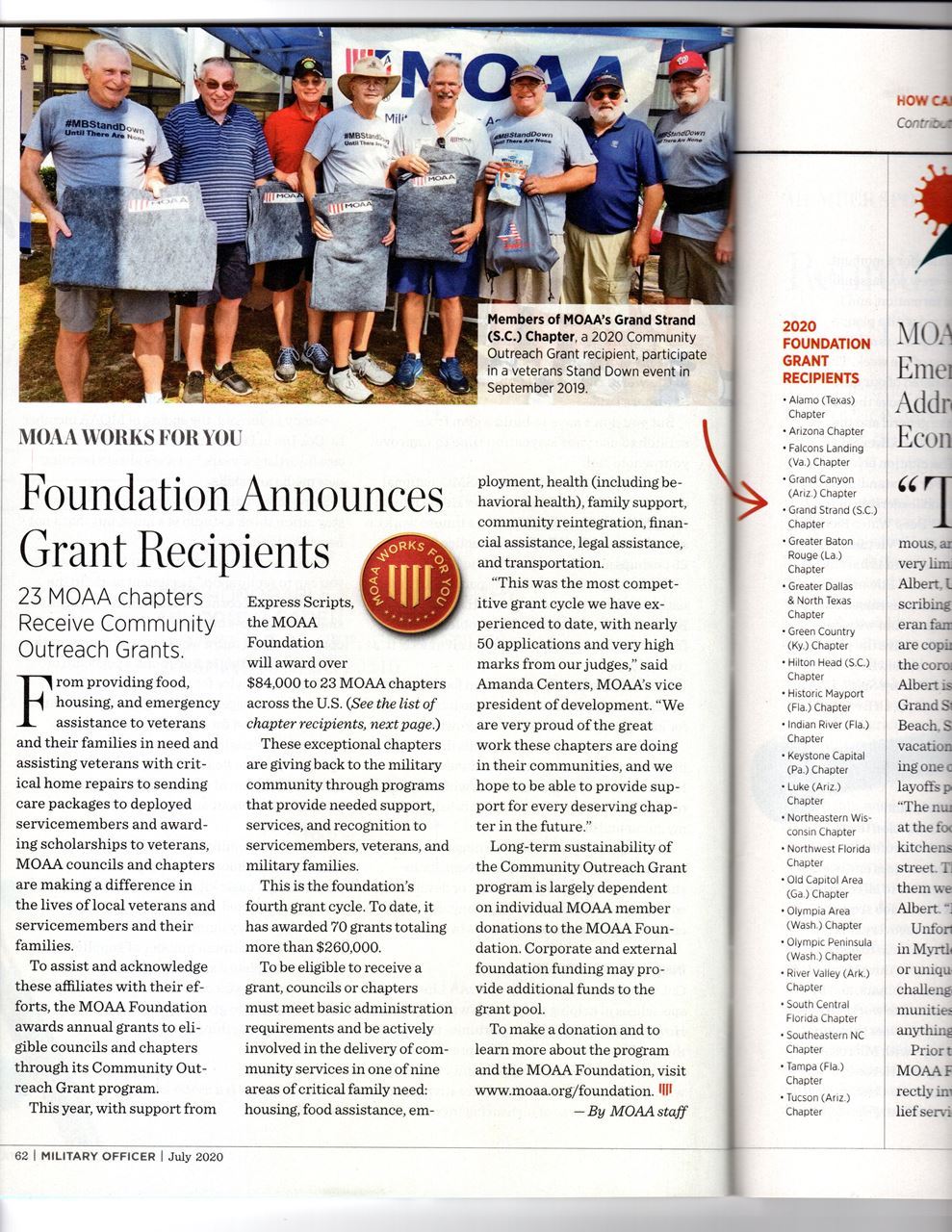 May 2020:  MOAA National honored the Grand Strand Chapter with a $5,000 grant in 2019 to support an annual Stand Down for homeless and needy veterans, as well as provide for the health and wellness of the veteran community along Coastal South Carolina.  MOAA awarded this grant again in 2020 for another Stand Down and doubled it to support veterans negatively impacted by the Covid-19 pandemic.  Homes for Heroes (H4H) also provided the Chapter with a $5,000 grant in 2019 to help needy veterans and their families with housing and other critical life needs.  H4H provided this grant again in 2020 to help veterans impacted by the pandemic.